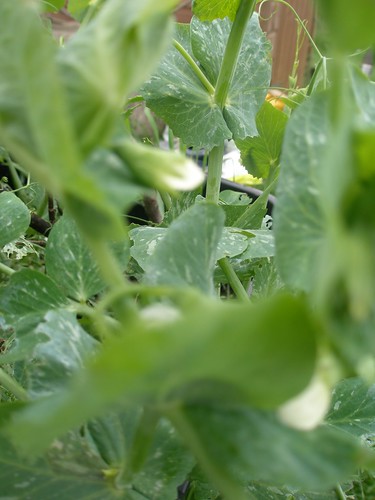 Sometimes, I get asked for advice about growing veg (I know, I can’t believe it either, although most people only ask once!).

One of the things I always say goes along the lines of ‘buy some seed packets, and follow what it says on the back’. It might seem disorganised and flighty, but sticking seeds in the ground and watching what happens is fun, and without the fun, many of us would give up.

However, in today’s post I’m going to go against what I’ve said, and make the following statement:

Not all of them, just some of the instructions on some of the packets, and specifically, sowing times.

Accidental September Harvests
For the last couple of years, I’ve been sowing peas, mangetout, and French beans all the way through the summer, right up until September. This wasn’t an experiment to see how late I could get harvests or any exciting project like that, but simply because I didn’t read the seed packets properly. I just presumed you could sow these veg well past June.

On closer inspection, my peas (Hurst Green Shaft) and my mangetout (Reizensuiker) say they should be sown outside between March and June, while my French Beans (Maxi) are April to June.

I only realised that this year. The last two summers have given me almost accidental crops into September (the picture is of peas flowering in October last year). This week, I’ve sown peas, mangetout, and French beans in an attempt to repeat the trick.

Freezing the Late Crops
The beauty of these green beany veg is that they freeze really well, and the reason I sowed them before was to fill up unused space on the plot. I couldn’t keep up with the French beans, which seem to love my soil, so I froze them. This year I’m going to try and get as many late peas and mangetout as French beans, which will make a nice change in the middle of winter when all I’ve got to harvest is rooty veg and leafy greens.

Several rows and containers of these seeds will go in to try and grab myself a catch crop before the clocks change. I’m effectively using up old seeds, and bare, spare space, so everyone’s a winner.

Planting Runners Now?
I might also try late sowing of runner beans. I’ve got half a pack of Scarlet Emperor burning a hole in my seed tin. It may be too late for these, but seeds germinate quickly this time of year so who knows, I might sneak a little harvest.

Of course, Sod’s law will probably dictate that now I’m planning late crops, I won’t actually get any…